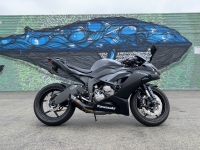 Bought myself a new '19 zx6r and added an aftermarket air filter and Graves slip-on. Pretty basic mods so I was hoping it would run fine without needing a tune. Lots of varying opinions, but I found that I lost throttle response and I knew it was running lean which could lead to future issues. Plus I wanted it to run properly; like a new bike should.<br><br>I did a bunch of research and came up with a few options. Ecu flash, Power Commander, or dyno tune. Power Commander is the only option that allows for quick map adjustment/changes in case I feel like upgrading headers or something in the future. Found one for half price on eBay and installed. The generic maps from Dynojet either had my intake with a different exhaust or vice versa. None of them worked properly. Still had throttle response so bad it would stall if I hit the gas too quick. I looked into adding Autotune to my PCV. I really didn't like the idea of having to drill a hole in my exhaust then trying to find someone that could weld in an O2 sensor bung cleanly. Dyno tune requires the same, but local shops want $400 to tune after that. Then someone mentioned Jeffomaps.<br><br><br><br>With my custom map from Jeffomaps I have a noticeable increase in horsepower and fuel efficiency. Delay in throttle response is completely gone. It runs great, sounds better, and I have the ability to quickly switch or modify maps if I ever feel like adding additional mods to the exhaust or motor.<br><br>I'm completely satisfied with my purchase, my new map, and especially the customer service. The PCV software and setup was a little tricky for me since I was completely unfamiliar with these programs. I called Jeffo up on a Sunday morning hoping he would get back to me in the next day or so. He called me back in 5 minutes and took the time to walk me through the process and get it all set up properly.<br><br>Thanks Jeffo !